The Halle Handel Edition (HHA) is a scholarly critical complete edition of the works of George Frideric Handel, based on all available sources and designed to meet the needs of scholars and practical performance. Renowned Handel scholars from Germany, the United Kingdom and the United States are part of the Editorial Board.

Prior to the HHA, other editions of Handel’s work were published, including the edition by Handel’s contemporaries John Walsh and John Cluer; an edition by Samuel Arnold (1787–1797) and Johann O.H. Schaum (1822–1825); the edition of the English Handel Society (1843–1858); that of the German Handel Society by Friedrich Chrysander (1858–1894); and the editions by the publisher Novello (1846 et.seq.). All of these editions are incomplete.

The HHA was started in 1955 and is scheduled for completion in 2023. The edition is divided into five series, comprising a total of 116 volumes and around 10 supplements:

Each volume contains a forward which introduces the origin, development and tradition of the works, discusses issues related to performance practice, and includes critical commentaries. The vocal works editions contain choir texts in German; where necessary, an English translation of the is included as well. The volumes in Series I and II contain a facsimile of the librettos printed for the first performance (since 1991).

Overall, Handel’s intentions are reflected as accurately as possible in modern notation. Any additions made to Handel’s written texts and scores are marked. (In sections, cited according to the introduction „about this edition“ at the beginning of each volume, with detailed notes on the editing principles. 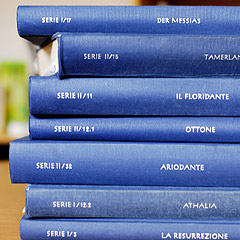 The Halle Handel Edition is an externally funded project based at the Institute for Music, Department of Musicology, at the Martin Luther University Halle-Wittenberg.

It is sponsored by the Union of the German Academies of Sciences and Humanities, represented by the Academy of Sciences and Literature in Mainz (Akademie der Wissenschaften und der Literatur, Mainz), with funds from the Federal Government Commissioner for Culture and the Media in Bonn, as well as from the Ministry of Education of the state of Saxony-Anhalt in Magdeburg.

The editorial office enjoys the kind support of the Foundation Handel-House in Halle, as well as of the Landgraf-Moritz-Foundation in Kassel.